Connect your Document Management System (DMS) to Karbon and manage client work files from a single source of truth. Today, we’re kicking off with Dropbox (OneDrive and more coming soon). 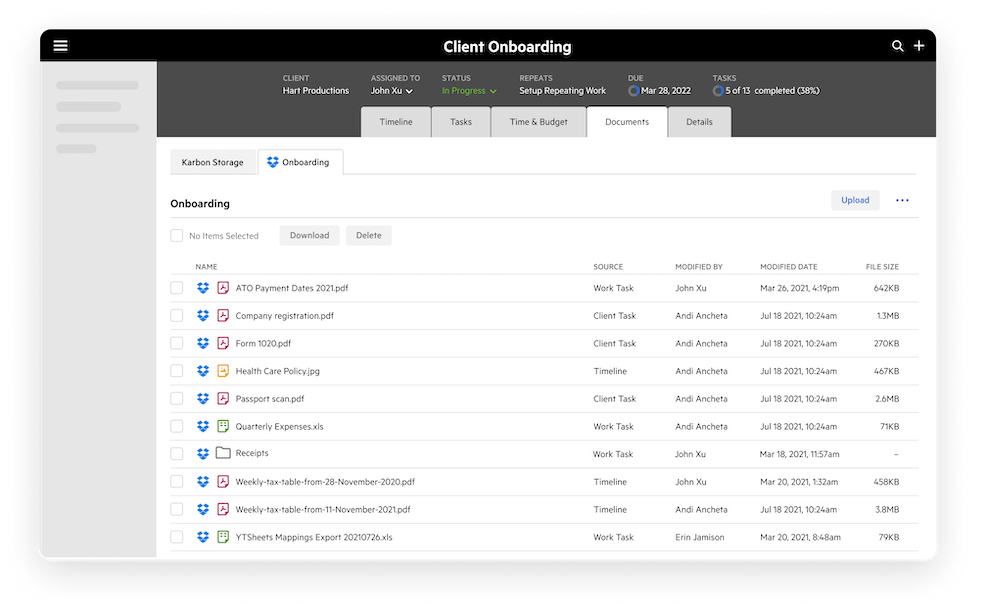 With document management in Karbon, you can:

Register for an introductory webinar specifically for Karbon customers.

We’ll use Dropbox as an example and demonstrate how to:

(note: both sessions will cover the same material)

So excited! Should we do both sessions or are they the same content?

Great question. I have updated the post to reflect that both sessions are the same.

Will Citrix Sharefile be an option?

Sharefile is not on the immediate roadmap but we are keeping it under consideration.

Is microsoft exchange under consideration as well? It would be interesting to know so I can make decisions - ultimately would we be updating software?

Super excited!! Such a huge win for us!!

Is Google drive being considered?

I also vote for Sharefile!

Yes, Google Drive will have coming later this year.

Can you clarify what you mean by Microsoft Exchange? I understand Exchange as the email service while documents are stored and accessed via Microsoft OneDrive.

we use microsoft exchange as our email provider but our IT have linked this with our server where we save all our documents.

Basically is a server in the cloud that we log on (not a cloud document system).

That would be extremely useful.

There isn’t an option to have reoccurring work to be automatically connected to their respective folders. So we have to connect each individual work item to a connected folder, every time it repeats?  I also don’t see a way to track “how many connections” are available or taken up. Do we have to find each work item we connected to disconnect it in order to add more connected folders? Once again, just like the time feature, it seems to be premature. At first glance there are so many missing features. When I first heard about this feature coming , I was so excited, but now I see that it is still missing a lot for it to be a feature that we can integrate as a company, but more importantly, one that is worth the price.

Hi , thanks for your feedback. We will take them onboard.

We do have upcoming updates that will address repeating works and management of connected folders.

Also, connections for completed work does not need to be disconnected and will not count toward connection usage.

Thanks for taking my feedback! and Thanks for the additional information on how the connections are disconnected on completion of work. It still does not make much sense due to the time it takes to “connect a work item to a dropbox folder” they could have just downloaded all the files and moved them to their folders in a faster more efficient manner. Once more, I’m not seeing the value nor the ability to add these features to make our processes more efficient. Instead, at the point this feature is at, it’s actually counterproductive due to the inefficiencies and huge limitations of the feature. I really appreciate it, especially when we so badly want to use these features, but there are still so many pieces missing for both the time feature, and now the DMS, they are useless to us as a company. Then once they can be used, only then can we determine if they are worth the value you put on them. I’m concerned Karbon is going in the wrong direction by adding watered down features and not finishing  building out the ones you already currently have that are still incomplete. Once more, there’s now a laundry list of features that are extremely limited and cannot be used for us: insights/intelligence, time feature, limited global automators or task automator limitations, and now the once amazing DMS feature has fallen flat and rendered useless. So I’m asking please begin following through, as you guys once did before. I’m starting to become concerned that Karbon’s monthly price per user will no longer be worth it after all of these features are useless, but get wrapped up into the subscription that we currently have in order to maintain the few useful features we can fully integrate. With that being said, we love Karbon, but wanted to give some honest feedback, that may make our decision to stay with Karbon a lot more difficult in the future.

Hi , welcome to the Karbon community.

I can understand your frustration and your desire for mature tools to use for your firm. I don’t know if this will help at all… Karbon uses a development approach that focuses on building features in iterations. You picked up on that when you said, “I’m concerned Karbon is going in the wrong direction by adding watered down features and not finishing building out the ones you already currently have that are still incomplete.” In a sense, this is the way it is supposed to happen. Karbon builds a feature to its minimum viable state and then releases it. The team continues to develop the feature based on feedback and observations after the release. Here’s a photo someone at Karbon shared with me to explain it:

The development team builds a skateboard when you want a Mercedes. They will get to the point where it works like the Mercedes, but the real-world feedback, like you and others give, is a necessary step along that path.

The alternative approach would be to try to guess all the ways that Karbon customers want the Mercedes to work and then not release the feature until it’s completely finished, but that is like building the car in the dark. What if people say they want one thing, but in the real world, they never actually use it? In a situation like that, Karbon would have spent a lot of time and money developing a shiny new fully mature feature that doesn’t get used. The features would take much longer to release, and they would be less useful, overall.

Karbon has experienced tremendous growth recently and has grown their development team so that they are now able to work on multiple features at the same time. There are currently multiple features in the scooter and bicycle stages, developed by different teams managed by different product leaders, but each product leader is focused on listening to feedback and using that feedback plus real-world statistics and observations to decide what’s important for the next version.

If your firm needs the Mercedes and cannot use the bicycle or scooter, that’s understandable. There are other firms that will test out the new features at different steps of the development cycle and it’s only a matter of time before you’ll have your Mercedes. If you’d like to have input into how the Mercedes will work, one way to do that is to keep trying out each different iteration and give constructive feedback along the way.

Does that make sense at all?

That makes sense and I understand why a company would develop features that way, to save on time and costs, but it doesn’t mean you charge “Mercedes prices” for “Scooter products”. It is also very convenient that there’s no timeline for when we will actually receive the “Mercedes product”, but we still continue to pay “Mercedes Prices”. This will allow most of the upfront costs of these features to be funded through higher subscriptions while only spending “Scooter money” on features.  I’m not trying to tell you how to run Karbon, but I am trying to make you aware that after the huge disappointment of the DMS feature, and then finding out Karbon is going to make us pay for “connections” on top of the already high costs of our user subscription for “Scooter features”, this is a major pivotal point in our company where we see Karbon is no longer worth the value they have put forth. Karbon has already forced us to move up to a more expensive subscription because Karbon didn’t grandfather our price in of $69/user. So now we’re paying more money, $89/user for the same ole features we’ve been using from the beginning of our subscription, back years ago. We still have a whole bunch of “useless Scooters”, that you’re making us pay “Mercedes Prices” for. Now that’s where the problem begins and even though you’re saving time and money by putting out “Scooters” first, Karbon still hasn’t  delivered “Mercedes features” for quite some time. So now, one of your longtime, original, die-hard customers, is not only questioning the short and long term value of Karbon, but how can we pivot away from Karbon’s increasing “Mercedes cost”, while putting out “Scooter products”, especially when we only have three “Mercedes” we can use. I’m just trying to make a difference by sharing our thought process, but more importantly, to share how passionate and loyal we are/were about Karbon.

, I think I get where you are coming from, and the value calculation is something only your firm can work through. I won’t make an argument for the value of Karbon to your firm.

Our firm came on board with Karbon a little over a year ago, and we have experienced an increase in useful features with no increase in price, which has been nice. We also came from a less effective and more expensive project management platform, so in our situation, we see Karbon as undervalued or low cost for the value. Of course, that’s a relative perspective.

I don’t expect us to agree on the value of Karbon to our respective firms. Our firm is happy with what Karbon has allowed us to accomplish, we are happy with the overall direction, and we are excited about the release and further development of upcoming features.

I don’t want our excitement to come across as argumentative. Your feedback is valuable, and the best thing, in my opinion, about Karbon is that they listen and act on feedback.

I agree, ! One of the best features about Karbon, is they listened to our feedback, but more importantly, they cared to take action on it. We weren’t just another client to Karbon. We were actually heard. That’s all we could ever ask for, because at the end of the day, we want to stay with Karbon, but we have to do what’s best for our company, and we’d expect Karbon to do the same for their company. Sometimes our clients out grow us, and that’s ok. Because not every client is the right client for P.S, and that goes for all businesses, including Karbon. So although we may become an outdated customer for Karbon, just know we fully understand, that with growth comes change. Sometimes that change isn’t right for everyone, but that’s the great part of this world, it’s ok that something isn’t right for everyone as long as we can come together to respect and understand how each business is unique and valuable in their own way. So I thank you for such an enlightening, insightful, and caring conversation we had over some items that we won’t always agree upon, but at least we were heard by Karbon. And at the end of the day, that’s all that really matters. Karbon cares.

Enter your username or e-mail address. We'll send you an e-mail with instructions to reset your password.

Sorry, we're still checking this file's contents to make sure it's safe to download. Please try again in a few minutes.

This file cannot be downloaded

Sorry, our virus scanner detected that this file isn't safe to download.